Roman Hindle, the Self-Proclaimed “soon to be ruler of the world” and His Letter To America 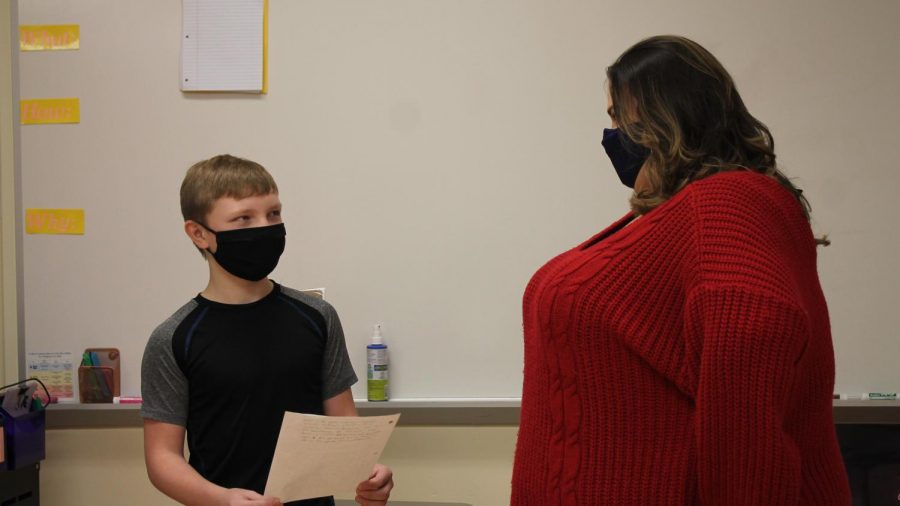 “Dear America,
Our future for this country is not that great…”
This was the way Crossroads Middle School student Roman Hindle started his Dear America assignment. Gateway and Crossroads students were asked to complete a “Dear America” assignment about what changes they wanted to see from this country. It was given to them on Veteran’s Day and the U.S. presidential elections had taken place the week before. The teachers voted on the best letter and the author of that letter received a prize.

Roman was the clear winner of this contest. His letter had moments of being humorous and also was very candid regarding where he thinks our country is headed.

Roman tackled subjects such as the lack of socialization among teens due to video games, littering, and even added a couple of jabs in at Ms. Brown, who he claimed is his least favorite teacher and “should be fired” because she gives him bad grades and doesn’t give him candy. Ms. Brown responded by pointing out “that he gets the grade he earns and he does get candy.” In fact, she recently purchased a 5 lb. bag of Jolly Ranchers with him in mind.

In addition to these subjects, he also wrote about how in the future he thinks kids will disrespect their parents more and how electronics will become more of a problem. Roman thinks the future will be more toxic.

Not only did he present the issues that America has, he also imparted a plan to address a problem among all high schools–the dress code.

“All they need to do is make a law so high schoolers can’t have their pants halfway down,” Roman wrote. “And the first reason for this is, drum roll please, it just doesn’t look cool.” He included other reasons as well, such as, that wearing your pants low is inappropriate “and you need to be appropriate for school” and “it’s super distracting.” He even goes on to say, “Like, you don’t expect someone not to look?!”

It appears that Roman is really wise beyond his years and his outlook on things that need to be changed in our country is valid. As we get older, I hope, like Roman, we see what needs to be changed and that we realize that we can also better ourselves as people and as a society.