A Heartfelt Graduation and Sad Goodbye To Honor Danielle Tyler 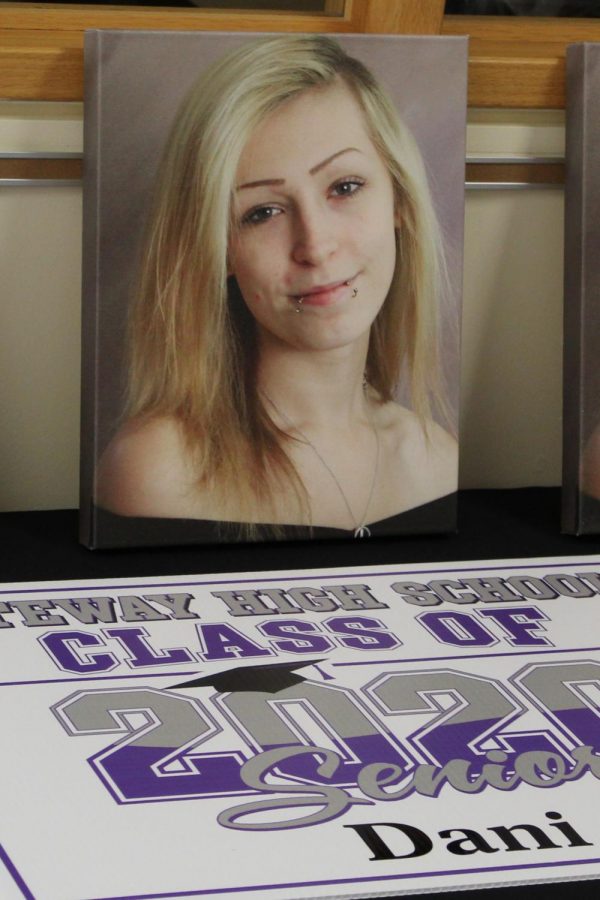 Dani's senior photo; a gift for her family from the staff at Gateway.

It’s hard to write this.

Graduation this year was difficult for everyone, but it was especially difficult for the family, friends, and teachers of Danielle Tyler. She was supposed to be honored in front of everyone for her achievements. She earned awards for her commitment to earning good grades and being a dedicated student. She was awarded the Governor’s Merit Award and the Presidential Award for Academic Achievement, both which were well-deserved. Dani not only graduated from Gateway, but from the Career and Tech Center in the videography program.

Dani was driven. Dani was a hard-worker. Dani was going places and we all knew it. Unfortunately, she was taken from this earth and was not able to see and feel the pride that she should have been able to feel for these accomplishments.

Dani was one of those students who had a tough exterior, but was actually quite personable and lovely. She was delicate and didn’t want to be hurt—by anyone or anything—so she did what she could to protect herself. Not everyone got to see the beautiful soul that Dani had because she so closely guarded her heart and she would only allow a few people to have access to that side of her. She hid beneath this tough exterior—and also underneath her red fuzzy blanket.

Gateway still honored Dani at graduation for all of her accomplishments. In our eyes, she is still a high school graduate and she earned the right to have her ceremony. Mr. Larrimore had the privilege of delivering Dani’s graduation speech to her family. First, he spoke of grief, specifically the stage of grief known as denial. He said, “sometimes [denial] has a necessary function of protecting us and preserving our sanity.” He continued by saying, “For this moment, I would like for us to imagine Dani hearing the graduation speech that she should have heard.  I would like for us to imagine seeing Dani receiving the awards and diploma that she earned.”

Mr. Larrimore spoke about the journey that Dani had taken while at Gateway and some fond memories. In his speech he said, “It’s fair to say that we have gotten to know [Dani] quite well. We know that she is not a morning person and has been known to take pajama day well past school spirit week. Even if she started the day stepping off the bus still wrapped in a red fuzzy blanket, she always found time somehow in the morning to flat iron her hair. Once fully awake, Dani turned into a pleasant, likable, and successful student, showing off her great potential.” He mentioned her “ups and downs” and the strength she had to overcome “tough obstacles.” He also made sure to tell of the respect that he and the rest of the Gateway staff had for her.

After the speech was delivered and the gifts and awards were handed to Dani’s family, Gateway staff lined the sidewalk in front of the school to pay tribute to Dani and to let her family know how much she meant to us. We were unable to participate in her graduation ceremony due to social distancing, but we did what we could for her and her family to bring them some peace.

Dani Tyler will be missed by us all and her legacy will live on.

This week, teachers had to clean out our classrooms. Everywhere I looked, I was reminded of Dani. The hallway, where she would have her meltdowns and where we exchanged hugs when she was having a bad day. The art room—she loved art so much. The table in my room that she claimed as her own. And when I opened my book cupboard to put a book away, I found Dani’s stash of breakfast foods—she was always hungry and wanted to make sure she had food when she needed it. I kept it there for her. When I spoke to some of the staff who were also cleaning out their classroom, they had similar things to say.

Dani was my student, but I loved her as if she were my own child. Many of the teachers and staff did. That’s what makes Gateway teachers different. We know our students—we know them well—and we adopt them into our hearts and they become our family. We know they are flawed (as we all are), but we accept these flaws and help try to get them to overcome obstacles that hold them back from being the wonderful people we know them to be, and Dani was no different. From what we knew of her potential and who she was, we all thought she had a bright future ahead of her.

Danielle Tyler was our family. We loved her and will miss her so much.